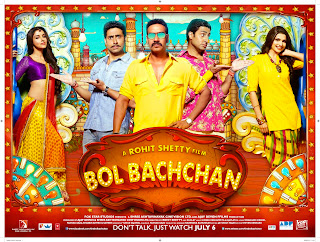 Story:
Abbas Ali and his sister Sanya are fighting a property case with their relatives and the court moves the judgment in their relative’s favour.  On the advice of a well wishing uncle, the siblings move out of Delhi in search of livelihood to a small town Ranakpur.In Ranakpur through a series of co-incidences Abbas unwittingly gets embroiled in circumstances where he is forced to lie about his identity.
Employed as a supervisor by Ranakpur’s feudal lord Prithvisingh Raghuvanshi, Abbas lives in fear of being exposed but cannot muster courage to tell his plight to his volatile master.
What Works:
There is madness to the film and it is inoffensive. All characters, situations and emotions are exaggerated and there are no pretensions about it. The screenplay is a series of action and comedy items and the dialogues outrageously crazy!
There is chemistry between Ajay Devgan and Abhishek Bachchan and it is a treat to watch their well synchronized action sequences as they jump into cars and mansions breaking bones and glass doors.
Writers Sajid Farhad serve a bhelpuri concocted out of the English language and prepare scrambled eggs out of Hindi language to evoke laughter and they succeed. Music directors Himesh Reshamiya and Ajay Atul go berserk and colour to the crazy banquet.
What Doesn’t:
The film and the characters are predictable and there are no surprises in content or technique. The narrative gets rhetoric; the action sequences after Singham appear childlike andAmar Mohile’s background score breaks your eardrums. The characters take too long to confess so the climax drags unnecessarily. There is absolutely nothing to take home.
Performances:
Ajay Devgan as the large hearted, simpleton obsessed with speaking faulty English is sincere and engaging. Abhishek Bachchan cast in a sort of double role effortlessly transforms from macho Abhishek B (his name in the film) to effeminate Abbas Ali punctuating his dialogue with ‘Na dhin dhinna!’ His dance medley to entertain Prithvisingh has you in splits!! Supporting actors Neeraj Vora and Archana Puran Singh (also in double role as Zora and Madhmati) have better roles than the two heroines Asin and Prcahi Desai who are most of the time relegated to the background.
Directors Cut:
Rohit Shetty has, from his debut film, flirting with comedy and action genres. With Bol Bachchan, Shetty proves that he can and will balance all kinds of films in his kitty. His target is box-office and unabashedly combines all the ingredients of a blockbuster, as a result the script explores every issue under the sun be it urban- rural, sibling-parent, job-marriage, items-jigs, English –transgender, Hindu –Muslim, double roles and double entendre.
The opening song of the film where Amitabh Bachchan makes a guest appearance and emerges from an egg shell speaking breathlessly a la Anthony Gonsalves in Amar Akbar Anthony and his explanation of Bol Bachchcan is the USP of the film.
Posted by Bhawana Somaaya at 13:26