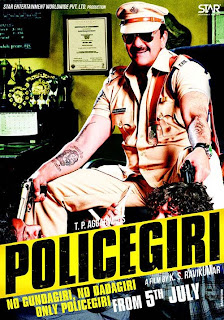 When Sanjay left for Arthur Road, sister Priya Dutt asked him to maintain a jail diary so that he could later reflect on what he went through. Had their father Sunil Dutt been alive he would have advised the same. Sanjay agreed even though he was never good with pen and this he kept his promise if not as a diary then via a letter a day to his wife and so far, he has kept his promise. So has Manyata despite juggling many duties as a wife, home keeper and mother.

Sanjay learns that his producers of 'Policegiri' are keen to premier the film in Dubai but Sanjay writes to Manyata requesting TP Agarwal to instead host a charity premier in Mumbai and send collection to victims of Uttarakhand. Rahul and TP Agarwal agree with him and stall premier abroad.

Sanjay feels calmer and hopes that all goes well with his film. A thought occurs to him. This is the first time since his debut, a film of his release in theatres and even though he is in the city, he will not be there to watch it. Strange!