Zakir Hussain “I have read the Upanishadas”

He is a costume designer, a theatre actor, an interior decorator, a classical singer, a percussionist, a green belted taekwondo player, a poet and much more. Usually cast in negative roles by filmmakers there is a spiritual side to Zakir Hussain that very few people know about.
Not surprising therefore that there was a unanimous cry of disbelief when the ace villain was cast in Upanishad Ganga, an extra-ordinary teleserial produced by by Chinmaya Mission and directed by the erstwhile Dr Chandraprakash Dwivedi.
Meeting and talking to Zakir Hussain on his new image was a revelation. Excerpts from the interview: 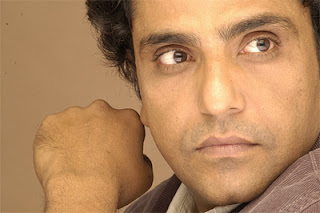 Isn’t it strange that Upanishad Ganga should be offered to an actor of your image?
I believe it is wrong to judge a person on the basis of his roles. I may be a good man and only play wicked roles or I may be a wicked man and only play saintly roles. Personal life has nothing to do with your persona and I should be judged on my performance.
So how did Upanishad happen to you?
Dr Chandraprakash Dwivedi and I have been friends for quite a long time now and have worked together in the past. Dr Dwivedi has been working on the subject for a long time and asked me if I’d be interested to play the character. I’m always open to experiments, new mediums and new experiences and said ‘yes’.
Is that all, what about philosophy of the Upanishadas?
Yes, that is the most important factor. I agree with the philosophy that is why I agreed to do the serial. I have read Upanishads and have been working on a project related to Upanishad so the characters and the culture weren’t unfamiliar for me. I said yes because I agree with the teachings of the Upanishadas and these things cannot be discussed, it is a quiet process that you go through – both as an actor and as a person.
Since the subject is set in a period was the spoken language a problem for you?
Not at all! The reason being my mother tongue is Urdu and I know to read both Urdu and Arabic. Also if there were any problems related to the character or the sensibility, Dr Chandraprakash Dwivedi was always there to help us out.
You are playing multiple characters, which one is your favourite?
Well I have played Dara Shikhoh, Aghori Baba Avadoot ,Valmiki,Yaksha and each of them was a unique experience. In films you stay with one character for a year. In this serial I change roles every week. It is a fascinating experience and even though I like all my characters I would say that Dara Shikhoh is closest to my heart. So far all we knew about Dara Shikhoh was that he is Auranzeb’s brother but after playing that character I realized how learned he was. He was a Sufi with a desire to learn the Upanishads. He was inspired by his guru Miya Mir to translate the knowledge of Upanishad’s into Persian and the result was greatly appreciated.
The serial features different stories in every episode, do you think that would work in today’s time and age?
Why not, why do we assume that everybody wants to watch only one kind of content? The stories are priceless in content and woven into a dramatic format for entertainment. It is different from anything that is showing on television at the moment. The Upanishad’s impart valuable lessons of life that need to be included in our daily lives as these experiences enhance our human character and world view.
But do you think the youth is interested?
Well, I feel they should be coerced to even if they are not by the elders in the family. Upanishad Ganga is a treasure trove of rare stories and it is sure to bring enlightenment in one’s life.
Has it in your life, would you prefer this to the fame and glory you enjoyed after Sarkar?
They cannot be compared. Sarkar and before that Sriram Raghvan’s Ek Haseena Thi and RGV are career defining moments in my life. RGV saw a single scene in editing and cast me for James and since then if Ramu finds any character likely to suit my personality he calls me do that role.
Apart from RGV who are your favorite directors?
I have worked with many directors and all have been very good but working with Tigmanshu Dhulia, Sriram Raghavan, Anurag Kashyap and Ramesh Sippy is always very special and exciting opportunity for me.
Do you think you will be a transformed person after Upanishada Ganga…?
I have no doubt about that. I can see that I’m changing my world view already and feel good about it.
Bhawana Somaaya
Posted by Bhawana Somaaya at 12:14