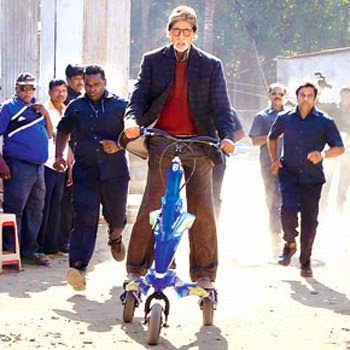 sets of Bhootnath Returns. It is said that a while ago the unit was shooting final patches at a location where the vehicles had to cross a construction blockage before reaching the venue. Bachchan endured the road blockage for a few days and then came up with a novel idea. He carried his automated scooter in his car dickey; as a result as soon as he arrived at the blockage, his staff extracted the scooter from the dickey and placed it on the road. Circled by his bouncers Bachchan slipped out of the car on to the scooter and rode on the scooter through the debris into the set much to the amusement of the security and those around him. Have you ever heard of a superstar riding on a scooter, I have not, and not one who plays a ghost in a film!

Posted by Bhawana Somaaya at 20:47