The first time I heard that filmmakers Abbas Mustan popular for thriller genre were making a comedy Kis Kis Ko Pyaar Karoon with Kapil Sharma I thought maybe it was a gamble but over the week end when I watched the duo dancing and enjoying themselves with Kapil on his show I changed my mind. 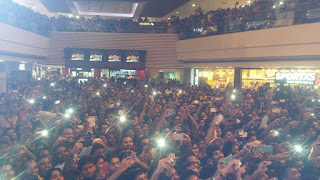 Here are two talented filmmakers who have worked with all the superstars but never got their share of limelight partly because they have always been shy of camera and partly because media did not find them savvy to feature in glossies.

One film with Kapil Sharma and Abba Mustan have turned into household names.

It is so refreshing to watch them enjoy themselves and enjoy the promotions of the film both on the radio and on television. 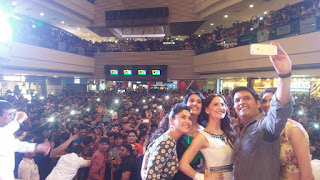 Kapil Sharma is enjoying the film promotions too but more than him it is the audience where ever he goes.

Last spotted the actor was mobbed at Season’s Mall in Pune and even though the organizers had organized tight security, nothing could have prepared them for the chaos that followed.

Don’t believe me look at the pictures.