It is interesting how our perception of patriotism in cinema has drastically altered over the decades. Don’t believe me? Here are a few instances over the decades... In ‘Shaheed’, 1948, patriotism was ideology. Inspired from the freedom struggle of the nation and directed by Ramesh Sehgal,
the film starred Nehruvian hero Dilip Kumar and the beautiful Kamini Kaushal. ‘Shaheed’ was about the spirit of freedom and the entire nation identified with it.

In ‘Mother India’, 1957, patriotism was values. Director Mehboob
Khan portrayed Nargis (Radha) as mother earth and the story of the film addressed the problems facing rural India post independence.
The various characters that come into Radha’s life are the various challenges and hardships that India has to overcome in her journey. There are times she is weak and vulnerable but she does not break down and never compromises on her moral convictions.
In ‘Shaheed’, 1965, patriotism was conviction. This was perhaps the first significant biopic of Hindi cinema, post independence.The film told the story of a freedom fighter Bhagat Singh and his four
friends who were willing to die for their country. Passionately performed by Manoj Kumar, the film in a way changed the destiny of Manoj Kumar as a filmmaker. Kumar was so influenced by his character that he devoted his career to the subject of patriotism.


In ‘Purab Aur Paschim’, 1970, patriotism was tradition supremacy.This was a story about two 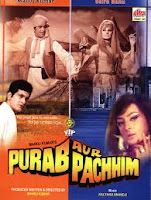 Indians, one raised in India, the hero (Manoj Kumar), who is tradition-bound and all-virtuous. The other,the heroine (Saira Banu) who migrated as a child with her parents and is raised abroad in a free society and lives by her dictates. The message of the film even for that time was exaggerated that everything Indian is superior and everything western is negative. A more tolerant and moderated version of the film was attempted by Akshay Kumar in ‘Namastey London’ years later, drawing parallels between Indian tradition and Western influences.

In ‘Kranti’, 1981, patriotism was revolution.‘Kranti’ was Manoj Kumar’s most ambitious project and told the story of the struggle of India’s Independence. The story journeys from 1825 to 1875 when
the British ruled our country and how a group of courageous freedom fighters got together and masterminded an attack on goras with limited resources. ‘Kranti’ was not just the top-grossing
film of that time but is amongst the top grosser of all-time Manoj Kumar films.

In ‘Roja’, 1992, patriotism was faith. Mani Ratnam was a relatively unknown name for the Hindi
audience till he made ‘Roja’ in Tamil later dubbed in Hindi, Telugu, Malyalam and also Marathi. ‘Roja’ starts as a love story gradually crossing boundaries of home and state to address a pressing national issue, terrorism. It is the story of the nation but also the story of a wife (remember “Dil hai chotta sa…” in search of her abducted husband and her faith that she can find him and restore peace at home, in this case, the nation (“Bharat hum ko jaan se pyaara hain…’’).

In ‘Krantiveer’, 1994, patriotism was about assertion. This was a film about the power of the common man when faced against adversity. Nana Patekar played the angry young man ready to put up a fight for anybody oppressed by establishment or in danger of life. Nana raises his voice loud and
clear in his fight because the character believes the time to endure is over.

In ‘Border’, 1997, patriotism was compassion. After ‘Haqeeqat’, India’s first war film ‘Border’ is an
epic based on real life events that occurred at the Battle of Longewala fought in Rajasthan during the Indo-Pak War of 1971. Like ‘Haqeeqat’, ‘Border’ portrayed backup stories of the soldiers, their love
and longing for home reflected in ‘‘Sandese aate hain…’’penned by Javed Akhtar. This was the first instance when the enemy was referred to as friend ‘‘Mere dushman mere bhai…’’

In ‘Rang De Basanti’, 2006, patriotism was obsession. Perhaps it was the mood of the nation that more and more filmmakers were penning patriotic films. After Ajay Devgn in Rajkumar Santoshi’s
‘The Legend of Bhagat Singh’, Rakeysh Omprakash Mehra signed Aamir Khan for ‘Rang De Basanti’. A Brit documentary filmmaker comes to India to shoot a film on Indian freedom fighters and students who agree to participate in the shooting get possessed by their characters and make it into a crusade. The film was about the contemporary India so irreverent and misplaced in aggression in climax. 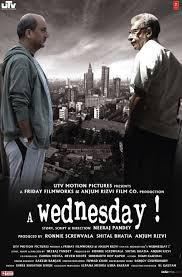 In ‘A Wednesday’ patriotism was courage. This Naseeruddin Shah and Anupam Kher starrer was based on a particular day that happens to be a Wednesday when something drastic could have
happened but does not and the issue raised is that if it had, were we prepared to face the challenge? Subtle, intelligent and gripping ‘A Wednesday’ broke many rules and it was the courage of the two characters that made the film a super hit in Tamil (‘Unnaipol Oruvan’), Telugu (‘Eeenadu’), and English(‘A Common Man’).

Posted by Bhawana Somaaya at 21:53