The story of the Mahabharata has a philosophical significance. The Pandavas and the Kauravas represent the positive and the negative qualities of an individual.

The Kauravas having larger forces than those of the Pandavas suggest that the negative generally outnumber the positive. 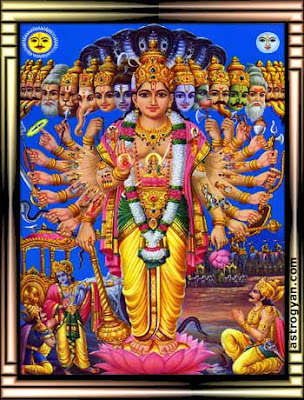 The goal of human existence is the realization of the supreme Self within. To realize the self, you need to rise above your involvement with the good and the bad forces of the world. Non-involvement with the good and the bad is essential for attaining spiritual knowledge. That is symbolized by Arjuna receiving the sermon of the Gita in the chariot between the Pandava and the Kauravas armies.

The Gita contains 701 verses spread over 18 chapters. The 18 chapters can be divided into three sets of six chapters. And the three sets explain and elaborate the supreme aphorism of the Vedas: ‘Tat tvam asi – that thou art’.

The first six chapters explain ‘Tvam – Thou’, the middle six ‘Tat’ – That, and the last six, ‘Asi’ – Art. ‘Tvam’ represents the Self within. ‘Tat’, the supreme God. And ‘Asi’ indicates that the Self in you and God are one. You art God

The Gita leads one to the ultimate state of spiritual enlightenment. Moreover, it gives a philosophy of life which can be translated into practical living in one’s social, official and domestic lives.

Posted by Bhawana Somaaya at 15:32