Gujrati theatre has been soaring in the last few years and the credit goes to extra-ordinary writers and directors on stage. Last week I saw a gripping play Code Mantra about a court martial case of a young army officer Second in Command Ashwin Rathod. A commando of the Rajputana Rifles Rohit Rathod unable to cope up with the excruciating taining seeks an immediate transfer in exchange of sharing highly confidential information. 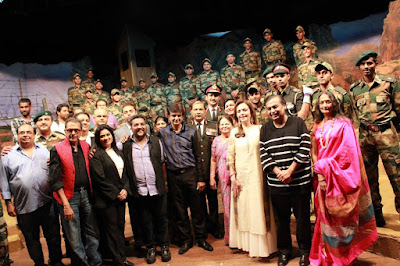 The same night commando Rohit Rathod is murdered in his barracks and his immediate superior 2.I.C. Ashwin is charged with his murder. What makes the case all the more intriguing is that Ashwin is the older brother of the deceased.
The play is pathbreaking in Gujrati theatre on many levels. It has modern art design and props are moved without curtain drop or fade out which is new experience for large capacity theatres like Bhaidas in Juhu.
This is perhaps the first time a subject on the Indian Army has been addressed on , not just that after a long time perhaps the audience is treated to a gripping court room drama involving Military law expert Shagun Oza/ Sneha Desai in a brilliant performance and her prosecutor colleague.
Code Mantra raises issues regading discipline in army life, corruption in legal system and nation pride.  The play belongs to Pratap Sachdev, writer/ music/ actor Sneha Desai and director of the show, the very versatile Rajesh Joshi.