Adi Marzban was the heart beat of Gujarati and Parsi Theatre. He was the voice on radio and the face everybody paid tickets to watch. As long as he lived Adi Marzban or Adi bhai as he was popularly called entertained his listeners and fans. 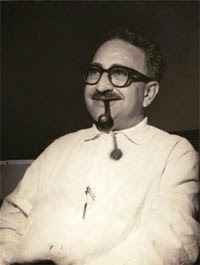 Years went by and it seemed like the theatre world had forgotten the genius apparently not because in a fresh leap to recall the genius Bharatiya Vidya Bhavan has dedicated an entire event to the theatre maverick.

That is what is admirable about Bhavans, one it is an apolitical institute that promotes cultural events where offerings for development and propagation of performing arts are a priority. This year, Bhavan’s Kala Kendra, The Art & Cultural wing of Bharatiya Vidya Bhavan, Radhey Group & Shubham Production have jointly come up with a show titled Bhavan’s Adi Marzban - Gujarati Open One Act Drama Competition. This will be a tribute to a veteran artiste and also a tradition following for the school that has for more than six decades worked towards raising theatre awareness.

Schedule:  December 1-6 2014. There will be two rounds of competition for the participants, the elimination and the final round.