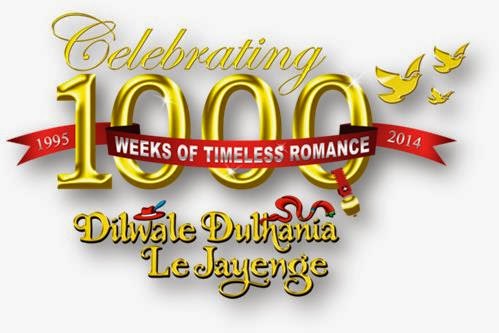 Shah Rukh Khan and Kajol came together yesterday at YRF Studios to celebrate the longest running film in the history of Indian cinema - Yash Raj Films’ iconic Dilwale Dulhaniya Le Jayenge directed by Aditya Chopra. "It's been 20 years for this film and I feel honoured that I was part of this film. It's been 100 years of Indian cinema and I would say one-fifth of it belongs to DDLJ”, Shah Rukh Khan said.

The DDLJ pair recreated the ‘DDLJ magic’ as they effortlessly recalled all their fond memories from the film, enacted scenes and recounted dialogues.  The duo released a book on the film where director Aditya Chopra tells the making of the film to author Nasreen Kabir. A spontaneous request to Pam Chopra, who was in the audience, to sing the still popular ‘Tujhe dekha toh yeh jaana sana…’The revelry continued at Mumbai’s iconic theatre Maratha Mandir where SRK and Kajol interacted with a full house of DDLJ lovers who had come to fall in love again and again…!

A memento of appreciation from the producer was presented to the theatre. The movie released on 20 October 1995 and completed 1000 shows and 20 years of uninterrupted run in a single theatre of a single city.