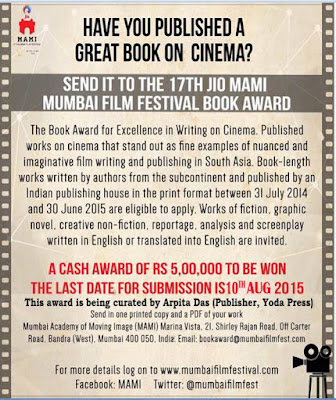 To recognize quality writing on cinema, Jio MAMI Mumbai Film Festival announces a new award category – the Book Award for Excellence in Writing on Cinema. The Award seeks entries that showcase nuanced and imaginative film writing and publishing in South Asia. Book-length works written by authors from the sub-continent and published by an Indian publishing house in print format between July 31, 2014 and June 30, 2015 are eligible for the Award.
The Award covers works of fiction, graphic novel, creative non-fiction, reportage, analysis and screenplay, written in English or translated into English. The Award carries a cash prize of Rs 5 lakhs. The last date of submission is Monday, August 10, 2015.

Leading Publisher & Editor, Arpita Das (Yoda Press), is curating the Award. Reflecting on the idea behind the Award, she said, “If we want more nuanced discussions around cinema in India, we need to have more writing on and around film. That is the belief which lies behind the Jio MAMI Book Award for Excellence in Writing on Cinema -- a recognition of the best writing on films in India in a way that more writers want to engage with cinema and make it their subject matter in their future.”

Anupama Chopra, Festival Director, Jio MAMI, said, “As a journalist and book author, it gives me immense pleasure to introduce the book award at Jio MAMI Mumbai film festival. We need to preserve, document, archive and analyze our rich and diverse cinema culture.

My hope is that this will help support and produce some stellar writing on our collective passion: Cinema."