On Sunday I had given my driver an off and hopped into an auto-rickshaw from Sion to Juhu. Driver Rashidbhai suggested a different route because some MLA was holding a rally on the Western highway. Rashidbhai said “Why are our politicians so foolish and don’t they think about people who need to drive to hospital or airport? Why can’t they hold meetings in open grounds and leave the roads for us civilians?” 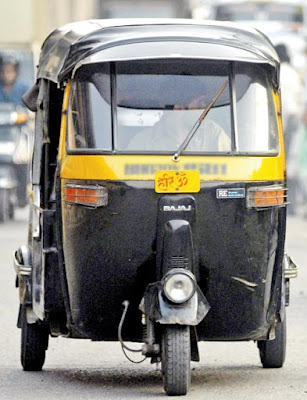 At the traffic signal, we stopped in front of a smiling politician on the billboard, Rashidbhai looked at him disapprovingly and said, “I’m 62 and driving from 8am to 8pm but with great difficulty I carry home rupees 1,000 every night and out of that I have to pay house rent, vehicle rent. My family does not get square meal a day while these guys” he says pointing to the hoarding make crores, is this fair? I sometimes wonder how they sleep with a guilty conscience or maybe have they bribed Almighty as well, kya pata…”

Rashidbhai was upset, he gulped down water from a soiled plastic bottle then wiped his mouth with a dry napkin tied on the handle, and continued “I am Congress loyalist, my father took me to vote for the first time and demonstrated me to stamp on the open palm. Since then I have been stamping on the palm for years and taught my children to do the same but not anymore! We trusted them for 60 years and they give us corruption, price rise and potholes. I want to invite our leaders and drive them on Mumbai roads. They will not survive five minutes and we are driving these rocky streets all our life. The fault is ours we have allowed them to treat us like donkeys!”

Rashidbhai was angry and it reflected in his driving, he said, “Forget tomatoes, forget onions and forget Biryani on Idd day but promise me dal chawal atleast. These days I attend all political rallies to make sure what they promise and they promise a lot. I was present for Narendra Modi’s rally in Mumbai and I was impressed. I drove by road to Gujarat and was impressed again. I have decided memsaab, I will vote for Modi. He is strong and this country will be safe in his hands”

What about AAP, don’t you trust the young CM in Delhi? “They are too kachha as yet, they have a lot of josh but are foolish.” What about Rahul Gandhi? “No memsaab he is a baby, earlier he never talked and now he is talking too much.” What about the Prime Minister are you satisfied with him, has he delivered his promises, what do you think? Rashidbhai was irritated, said, “I was sure he would win and he has won. He has not delivered his promises, well not all of them but we need to give him time, he will”
I had reached my destination but Rashid bhai had not finished “Log kuch bhi bole but Narendra Modi mein dum hai. Aaap dekh lena ye ek aadmi aakha India badlega ek din.”

Posted by Bhawana Somaaya at 10:44