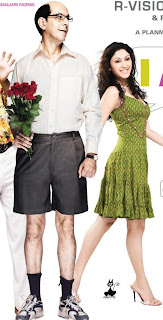 by Bhawana Somaaya
Story:
Shubendu is a principled middle-aged writer struggling to make two ends meet. He is 42 and lives a drab life till he makes an internet friend, a 22 year old beauty queen and for the first time is tempted to lie. His roommate, Gagan is a smooth operator who lives in a make believe world without a penny in his pocket. What follows is a ride of lies and embarrassing tales of cover-ups.
What works about the film:
The first half of the film is absolutely hilarious and the narrative engaging.
It is a saucily written screenplay and deliciously performed by a team of brilliant actors like Saurabh Shukla, Lillete Dubey and ofcourse the four lead players – Rajat, Ranvir, Neha and Manjari.
What does not work: 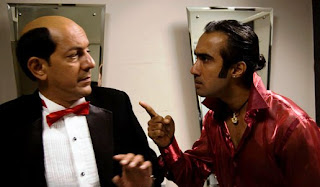 The second half does not live up to the promise of the first half and drags unnecessarily. The climax is particularly disappointing and almost unbelievable.
Verdict:
For those exposed to the best of Saurabh-Rajat combo this one lacks the magic. I give it 2 or 4 days in cinema halls. 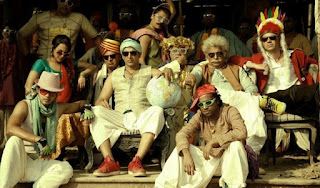 Story:
In 1947 when the maps of India and Pakistan were being drawn, Paglapur went unrecorded. The village had the distinction of housing the largest mental asylum in the region. During partition, the asylum inmates broke loose and established their own republic away from the rest of the country. Paglapur remained neglected until a NASA scientist of Indian origin returns to his roots and changes destiny of home town. 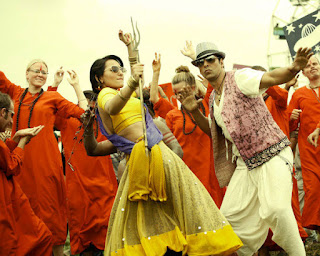 What works about the film:
Lead pair Akshay Kumar-Sonakshi Sinha and all the supporting actors playing villagers who submit to the utter madness of the plot. All the dances lovingly choreographed by Shirish’s wife Farah Khan and punctuated with thumkas from Sonakshi.
Performances:
As Agastya working on a top secret project for creating a device to communicate with aliens Akshay Kumar is competent. As his wife ready to follow his dream in America and Pagalpur, Sonakshi is endearing.
She enjoys being in front of the camera irrespective of what the script has to offer.
What does not work:
The illogical plot and screenplay. Director Shirish Kunder wanted to make India’s first extra terrestrial comedy but the fact is that Joker neither makes you laugh nor cry! You submit to the madness in exasperation. There is a character who thinks he is a lamppost and so hangs from a tree top. Another speaks gibberish. Everybody is in search of the aliens and this includes the White House, FBI, media and battalion of army waiting with cannons to attack them!!
Message confusing:
The pack of cards and Joker used as metaphors for Pagalpur village is contradictory. In the climax Akshay Kumar says Pagalpur does not need any patronage, then why did you go through all the trouble my dear Agastya?
Verdict:
It is a no show, sorry Kunder you served us bad cards!

Posted by Bhawana Somaaya at 20:00 No comments: 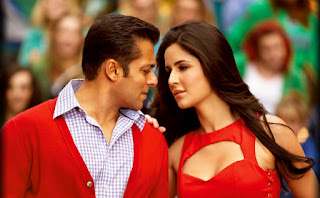 Story:
In the dark world of intelligence and espionage many secrets are stored for security but some escape the files and become legends. Tiger (Salman Khan works for Research and Analysis Wing, ’s external intelligence agency and is always trotting the globe on assignments. On one such mission Tiger meets Zoya and what follows is a tumultuous journey watched and followed by two nations.

What works about the film:
Everything: from the opening frame showcasing credit titles against the back drop of to the closing shot freezing on a Black & White frame, writer -director Kabir Khan travels his audience through unfamiliar path and constantly surprises them.
There is not a dull moment in the film and for this the credit goes to the writers-Nilesh Mishra and Kabir Khan. The plot, characters and dialogues are completely believable.
The film has all the twists and turns necessary for a thriller and is ably aided by all the technical departments. Julius Packiam’s background score is seductively upbeat even though it has a striking resemblance with the background score of Akhtar’s Don. Rameshwar Bhagwat’s editing is razor sharp and action director Conrad Palmisano conceives fearless, magical moments on screen. Aseem Mishra’s cinematography captures blue seas, brown mountains, orange skyline, magnificent architecture and a gorgeous star pair!
It is a treat to watch virgin locations like , , Kazakhastan as part of narrative and not just for song and dance. Interestingly even the choreography and the songs are in harmony with the story. Special mention must be made of Katrina’s costume by Alvira Agnihotri and the vibrant production design. 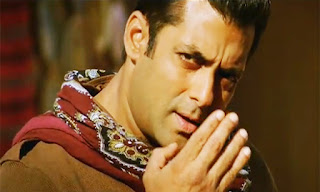 Performances:
To all those who have complained that Salman Khan never breaks away from his star image, watch the actor play a RAW agent with sincerity and restrain. He is tough when on a mission, awkward when he is ogled by neighbours, attentive when with his senior, endearing in romantic scenes involving Katrina, anguished when betrayed and fearless when courting danger. Tiger alias Rathore Singh is a character suiting Salman’s age and image!
Katrina Kaif always underplays and that is her strength as an actor. She surprised everybody in and Rajneeti and Ek Tha Tiger is one more feather in her colourful cap. As Zoya she is mysterious and alluring and manages to affect you in all her important scenes.

What does not work:
Very small things: There is no explanation about what happens to Roshan Sheth and the Ranvir Shorey and Girish Karnad’s premise of disagreement is unconvincing.

What’s special:
The action sequences are majestic, that Kabir Khan dares to unfold a story untold so far, Salman Khan and most important, the politics of the film! The message was infallible in Veer Zaara and perfect now and both these films are produced by YR Films.

Verdict:
It guarantees a blockbuster opening and house full running for three weeks all over in single screens, multiplexes and abroad.

Posted by Bhawana Somaaya at 11:17 No comments: 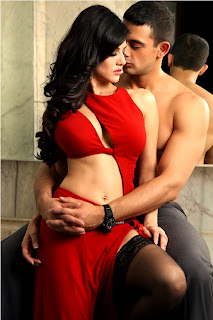 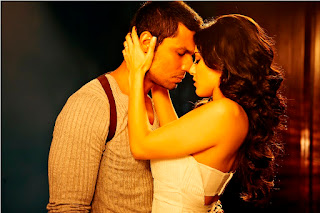 All of them are extremely bad but if I have to put them in the worst order it would start with senior IB officer Arif Zakaria who is hilariously out of place, his junior Arunoday Singh who is expressionless through out the film, cop turned aggressor Randeep Hooda who is so inconsistent that I suspect he is performing to a different script in his mind and finally Sunny Leone –all she does in the film is to walk around in lingerie and heave her bosom heavily.