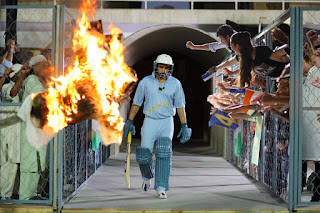 For some time now filmmakers have been fascinated with the idea of biographies. There have been stories of how a film is being planned on the life of M S Dhoni and another on the life of Mohammad Azharrudin has been in the media. To end controversies about who conceived the idea first MSM & Balaji Films did what Hollywood has been doing for a long time.

They held a media event to announce the starting of a film that will be released in 2016 and presented an audio visual of what can be expected in the biopic. Present at the occasion was Azharrudin himself who spoke about what made him agree to give the rights of the film to Ekta Kapoor. The trailer reveals the cricketer walking into the cricket stadium loudly cheered by his fans with a voice over that says: I’m Azhar and I’m famouus for three things: my batting, my marriage and one more that the world wants to know.

Emraan Hashmi who plays Azharrudin in the film said he is training for the role. “And I’m being trained by the master himself. This is the most special experience of my life.”
Posted by Bhawana Somaaya at 09:51