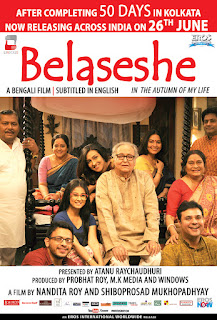 After the success of Badlapur, NH10 and Tanu Weds Manu Returns, Eros presents another content gem, Bengali film  Belaseshe- In The Autumn of My Life co-directed by Shiboprosad Mukherjee and Nandita Roy. Released in Bengal 1 May, 2015 the film has been running house-full in cinema halls for over 6 weeks.

A heart rending tale of an ageing businessman Biswanath Majumdar who takes a bold decision of divorcing his 66 year old wife Aarati after 49 successful years of marriage. The movie brings out the complexities of human relationships; marriage and social perceptions. Starring the renowned Bengali actors Soumitra Chatterjee, Swatilekha Sengupta, Rituparna Sengupta, Indrani Dutta, Shankar Chakrabarthy it is a must match film.

I recommend Shoojit Sarcar make the film in Hindi with Amitabh and Jaya Bachchan.