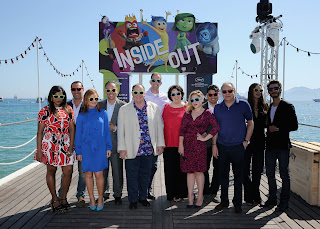 Disney Pixar has made a sensational return at the Cannes Film Festival with their new animated film Inside Out which has been described as "mind-blowing". The reception to the film after its premiere had everyone teary eyed when the film concluded.
An unusual idea of what goes on  inside the head of 11-year-old Riley, where voices like Joy (Amy Poehler), Disgust (Mindy Kaling) Sadness (Phyllis Smith) and Anger (Lewis Black) compete for the girl's attention/emotion/ and memories.
"My daughter was about nine when she did the voice of Ellie in Up," said Director Pete Docter, referring to the movie which won him the Oscar for best animated film in 2010. When she turned 10 I felt she appeared a lot less energetic unlike her friends, she appeared suddenly withdrawn and I wondered what went on in her little head and that's really how the idea of the film was born. Inside Out is actually a tribute to my girl and all children."
Disney Pixar's Inside Out releases on 26th June in India.
Posted by Bhawana Somaaya at 17:41