I recently attended a friend’s wedding where they deliberately put strangers on a common table together for dinner. In the beginning every one is awkward and uncomfortable but gradually as the evening progresses everyone dropped their guards and talked about themselves.

Two ladies at my table were house-wives and after going through their detailed time-table I repeat what I have always believed in-housewives in our country don’t work full time but overtime without a break.

There was a doctor who has now retired and spends his time reading newspapers and watching television. He said all these years when I was in practice nobody ever asked me how I was because they were so busy telling me what was ailing them. “Now for the first time everybody asks me how I’m doing and I just love the attention.”

There was a young girl who has just finished her MBA and is waiting for a job. “It is the worst time to have the degree” she explained to me, “Because everybody is an MBA and nobody has a job in this recession time.”

When I introduced myself I was asked a question I always dread to hear: ‘So how does it feel to be a film journalist…Do you believe in the people you write about?’ 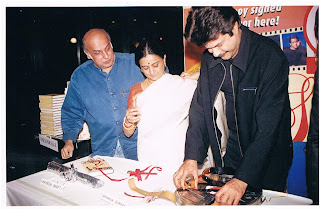 It’s a question I’m asked time and again by family and friends and it always feels strange to be answerable to them for the illusionary world I’m associated with. It feels strange to defend the dream merchants for whom I’m the outsider.

So when it comes to talking about me with strangers I’m self conscious and don’t reveal too much but they have questions and one common line repeatedly thrown at me is “But you don’t look like a film journalist.’ I have never understood the implication or maybe they expect me dress in ostrich feathers like Helen and perform an item number which I don’t.

It has to do with perceptions and if society holds an exaggerated image of the film fraternity then we as the media require doing some soul searching. There is a possibility that every time in our hurry to tell a story we have not been fair to our subjects. We have elaborated their quotes to spice up our copies and unknowingly tilted the balance.

Granted there is a dark side to the glamour world. In so many years of my career I have witnessed many moments where I’m left open-mouthed by the savagery of what I witness. But there is another side to show business too, the better side that only an insider can know. Cinema is perhaps the most sensitive medium where multiple talents come together There is creativity and compassion, warmth and wisdom that an outsider
will never know. Inaccessibility prevents identification.

Insecurity is an overwhelming emotion in any creative profession and in the film industry even more so. Film stars are peddlers of emotion. There are more emotional wrecks in the film world than in any other place. Every thing comes in excess here. There is shame and scandal, exhibitionism and eccentricity but there is also diversity and energy, a fatal attraction about the world of cinema that is obsessive.

Once you've been a part of it you feel incomplete without it.

Among the many reasons I continue to write books on show business is to present that other side of stardom. The side I have known and grown to love. The experiences have been an integral part of my growing up...It is watching their pain and passion that I have learnt many lessons of life. I have probed into the complex world of these beautiful people, exposed their insecurities and analyzed their contradictions.

When I wrote my first book Salaam Bollywood I worried endlessly if I had crossed the boundary line, revealed too much because I knew so much more. I was conscious of coming on strong on friends in my quest of being objective. There was a conflict between the journalist and the individual and I’m proud I didn’t let down either. 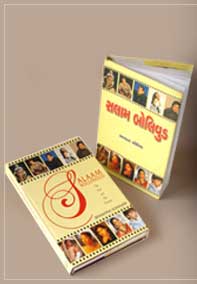 Today, when someone asks me the question, ‘How does it feel to be a film journalist’ I look at the person asking. I wonder if it is worth reacting...Strongly..? I’m not sure.
Posted by Bhawana Somaaya at 12:05

Email ThisBlogThis!Share to TwitterShare to FacebookShare to Pinterest
Labels: Salaam Bollywood, The show goes on