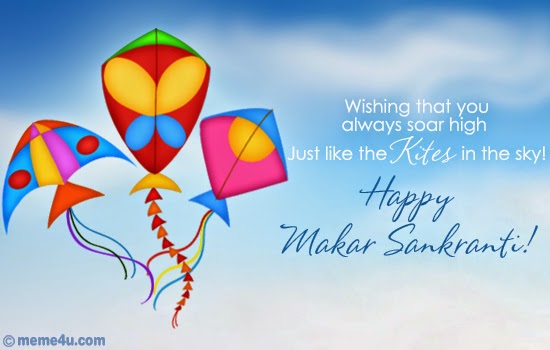 Uttarayan, as Makara Sankranti is called in Gujarati, is a major festival in the state of Gujarat which lasts for two days.

Gujarati people keenly await this festival to fly kites, called 'patang' in Gujarati. Kites for Uttarayan are made of special light-weight paper and bamboo and are mostly rhombus shaped with central spine and a single bow. The string often contains abrasives in order to cut down other people's kites.
In Gujarat, from December through to Makara Sankranti, people start enjoying Uttarayan. Undhiyu (spicy, baked mix of winter vegetables) and chikkis (made from til (sesame seeds), peanuts and jaggery) are the special festival recipes savoured on this day.
In the major cities of Vadodara, Surat,Rajkot, Ahmedabad, and Bhavnagar the skies appear filled with thousands upon thousands of kites as people enjoy two full days of Uttarayan up on their terraces.
When people cut any kites they used to yell with words like "kaypo chhe", "e lapet","phirki vet phirki" and "lapet lapet" in Gujarati language.