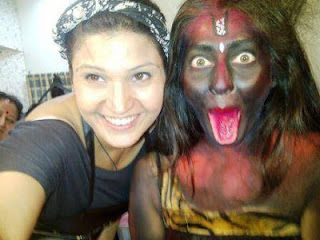 I was meeting up somebody at the Costa Coffee near my home and discovered that the lady on the neighboring table was Indian's first prosthetic makeup artist, Ritoo Jenjani. Ritoo told me that she was responsible for the transformation of Goddess Pravati into Goddess Kali in the teleserial 'Devon Ke Dev Mahadev'.  Jenjani first worked with Kamal Haasan during 'Vishwaroopam' followed by the 'Rise of the Zombie' with Luke Kenny. Ever since Jenjani has been in the limelight and was invited by Rakesh Roshan for 'Krrish 3' but unfortunately Jenjani was on a sabbatical for her pregnancy.  She has no regrets and says that the appreciation she received for her work in Mahadev is more than satisfactory, “Creating the Maa kaali look was not easy, I had to create the prosthetic tongue, skull mala, skirt made of bones, demon head, prosthetic hands and full body painting for the Kali avataar. I did a lot of research and then the final look was created. It is interesting how cinema and television is waking up to new expressions and experiments. Until recently prosthetics was associated only to horror movies but today perceptions have altered drastically. My job is to make the actor resemble the character and if I can make my audience forget the actor and involve him with the character then my goal is established.”