On Sunday the legendary writer of Gujarati stage returned to spotlight when director Manoj Shah brought him alive on Prithvi Theatre with an autobiographical monologue aptly titled Hu, Chandrakant Bakshi... Produced by Ideas Unlimited the play recounts the life and times of the prolific writer who lived life 70 mm. 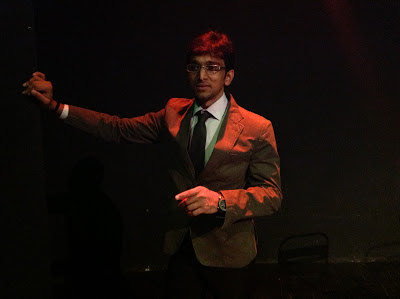 Those who knew him and those who read him were familiar with his zest and passion, controversies and contradictions.

Manoj Shan encapsulates Bakshi’s eventful life and unfolds drama without judgment. Bakshi was a great storyteller, a compulsive writer of books and columns published in various newspapers over the decades.

His dear ones often asked Bakshi how he would like to be remembered…As a professor who loved his students, as the author who connected with his readers, as the sheriff of Mumbai or as a family man embroiled in domesticity...?

It seems that Bakshi would have liked to be remembered as little of everything, but most important as a man who celebrated life… flirted with politics… argued about religion…engaged in literature… worried about history…!

Hu,Chandrakt Bakshi…is a glimpse of all that and more. Written by Shishir Ramavat and enacted by Pratik Gandhi who is privileged to play the role of the distinguished writer is a journey into an era that should not be missed.

Manoj Shah who is the man behind many sensitive and thought provoking plays (my favorite is Mareez) may take a bow.