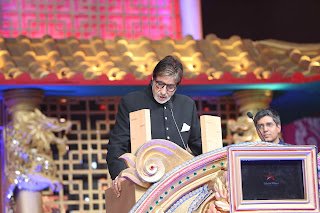 The best thing about any award night is their back stories. Amitabh Bachchan had flown into the city for a day to record a song for Wazir with Farhan Akhtar and had warned us he would leave early because he was taking a charter to Kolkatta in order to attend shooting at Howrah Bridge. Bachchan arrived at the time he had promised and collected his trophy for Most Entertaining Actor in Social Role for Pikku and was on his way out, saying his goodbyes, when he was summoned back to the stage for his second award, Most Entertaining Actor in a film and again it went to Pikku.
The Big Star Awards are based on popularity and voted on 92.7BigFM/ BigFM website and StarPlus website. 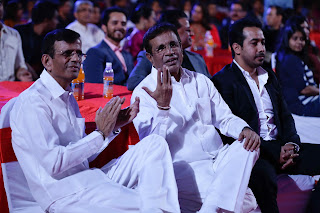 Directors Abba Mustan were nominated in Comedy category for Kis Kis Ko Pyaar Karun and presented the Thriller category. Have to say this that Abbas and Mustan are the most sporting directors of filmdom.

Posted by Bhawana Somaaya at 12:34