Naukar starring Sanjeev Kumar and Jaya Bhaduri released in the year 1979. Jaya Bhaduri got married to Amitabh Bachchan after the release and super success of Prakash Mehra directed Zanjeer and temporarily quit acting. 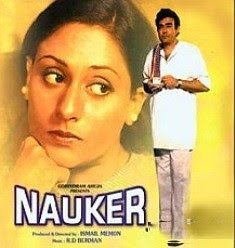 In the year 1974 Amitabh and Jaya’s first born Shweta Bachchan was born when Amitabh was shooting for Sholay in Bangalore. Jaya was pregnant during the shooting and it is evident in some of her closeup scenes.
In the year 1976 on the Basant Panchmi day Abhishek was born and Jaya was engrossed in domesticity and children.

Jaya had been careful not to sign new projects once she had decided to get married and while most of her films were completed before she became pregnant, one film that got stuck partly due to lack of finances and partly due to unavailibility of Jaya’s dates was Sanjeev Kumar starer Naukar.
It was in the winter of the year 1978 when I was a cub reporter and sent for the patch up shooting of Naukar at a private bungalow in Pali Hill.

Jaya had gone home for lunch and returned to sets with a group of her friends who patiently waited in her room as she expertly completed her shots.
In between shots she spoke to me about marriage, motherhood and how it alters the life of a performing actor.

This was the phase when Amitabh Bachchan had banned the media and Jaya was not communicating with journalists but because she knew my editor she interacted with me and was her candid best.
After so many decades, Jaya Bhadure nee Bachchan remains the person she was many years ago.

Posted by Bhawana Somaaya at 13:14