07 January is a spectacular date in Hindi cinema. On this date two super hits released in the same year 1966 and both starred Asha Parekh -Teesri Manzil directed by Vijay Anand and produced by 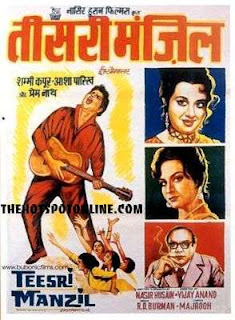 Nasir Hussain and Love in Tokyo with hero Joy Mukherji.

Teesri Manzil was to originally star Dev Anand but due to some disagreement Nasir Hussain replaced him with Shammi Kapoor. Today, the film is unimaginable without Shammi Kapoor as Rocky playing the band. The dance number ‘Aaaja aaja…’ was a first in Indian choreography. 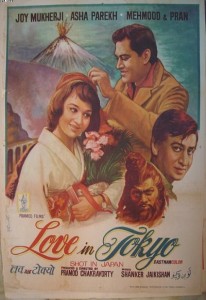 During the shooting, Shammi Kapoor lost his first wife Geeta Bali to tuberculosis and did not shoot for a month but the set remained at Mehmoob Studio undismantled waiting patiently for the superstar to return to work. He did, after a month and shooting resumed.
Love in Tokyo was the first film to be shot entirely in Japan and Asha Parekh is the first heroine to dress in a kimono during a song sequence ‘Sayonara…’ After the film Sayonara became a part of daily parlance and after two back to back, superhits, Asha Parekh became the  favorite of all her distributors.

Posted by Bhawana Somaaya at 10:35