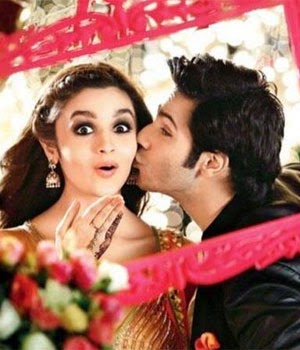 The occasion is the trailer release of AA Productions and Karan Johar’s new film Humpty Sharma ki Dulhaniya and the venue, PVR Juhu.  The media is settled in their seats and the cameramen all ready on the top berth to capture an overview of the event to unfold. Exactly an hour later than the allotted time finally the brand backdrops are brought on stage and spread out. It is an indicator to start the show.  The lights turn dim, from back stage appears a doli on the stage.

The curtains are sealed and you expect the heroine of the film Aliya Bhatt to jump out of the doli instead it is Varun Dhawan who jumps out with shades and a microphone in hand. Varun introduces himself as Humpty Sharma and declares that he is desperately looking for a bride.“Deepika, Katrina jaisi koi bhi chalegi magar thodi short hogi toh mujhe zyada suit karegi...” Loud bugles, deafening drums and a row of baratis dance down the aisle and among them is the effervescent Aliya Bhatt dressed in a costume similar to what Rani Mukherjee wore in Bunty aur Babli.

Aliya hops on the stage beside Varun and the duo are ready to take any questions from the media.

Posted by Bhawana Somaaya at 14:40