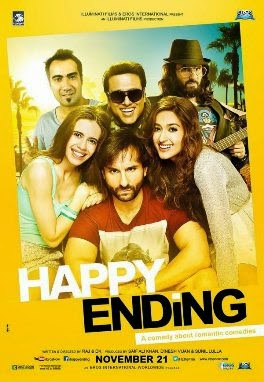 Directed by Raj & DK Happy Ending is presented by Eros International and Produced by Illuminati films and is set to release on 21 November. The trailer of the film released a few days has created a flutter in the trade because of the extraordinary casting. Apparently the director duo was quite nervous when they had to direct a tricky scene with Govinda, says Raj “We were really nervous about directing Govinda because in one scene we needed to paint his body with a marker pen. Now this is a rather strange request to make to an actor and we are confused how to tell him so. When we finally did, he was astonished and took a long pause that kind of scared us but then happily agreed. Contrary to what we had estimated Govindaji was more than co-operative and we got a fantastic scene, infact I would say it is one of the highlights of the film” laughs Raj!
I guess all’s well that has a happy ending.