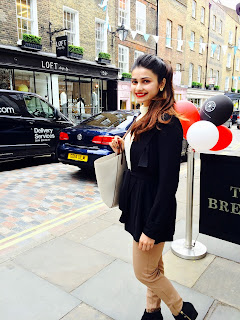 While MSM and Ekta Kapoor held a trailer release of their ambitious venture Mohammad Azharuddin biopic and the cricketer and hero Emraan Hashmi addressed the media, the heroine of the film, Prachi Desai decided to go on a holiday before she committed to one long year to the film.

Like most young actors and filmmakers, Prachi has made it a practice to escape for a month or two before getting on the treadmill again. Prachi will be seen in Rock on 2 this year followed by Azharuddin in 2016.

While cricketer Azharrudin is reading and reading the script and Emraam Hashmi is training in cricket, Prachi Desai is walking the streets of London, may be that is her way of preparing for the role.
Posted by Bhawana Somaaya at 13:10