It feels nice to learn that my book Amitabh Lexicon has sold 4000 copies in 20 months and we have ordered a big reprint order of the same.

It feels better when Tarun Katiyal CEO of RBNL offers me a platform to showcase the glorious paintings from the book at Lexicon Gallery an initiative of Big CBS Prime. 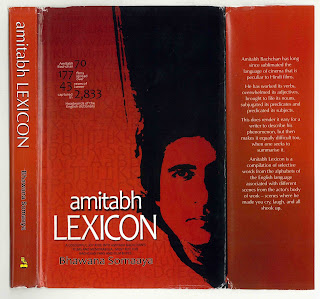 And it feels superb to release Lexicon as part of a proceeding to honour Bachchan as India’s Prime Icon by Big CBS Prime.

Now a little about the book:  Amitabh Lexicon is a colorful joyride into Bachchan’s films and memorabilia. The book compiles alphabets of the English language associated with different scenes from the actor’s body of work.

Lexicon captures 2,833 head words of the English dictionary into films of the actor spread over 43 years of his magnificent career. The book quite literally is ‘Amitabh A to Z’ – it is a celebration of Hindi Cinema’s biggest success story, which continues to remain a national obsession. There are quotes on every alphabet by the megastar himself.

The foreword of this unique concept book is written by Lord Meghnad Desai and contains 23 colour illustrations of different props from A to Z used by Amitabh Bachchan in his films. Published by Pustak Mahal it is a 335 pages – art colour paper and hard bound.