Recently at the Bangalore literature Festival I was on a panel discussion with eminent writer and journalist Tavleen Singh. The topic was biographies and Tavleen was sharing the making of her new book Durbaar. I could not resist asking Tavleen a question I have often been asked by journalists and students: How do you write your books. What is the process? How many hours a day are you in front of the computer? 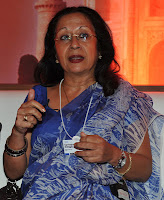 Tavleen was more than happy to share the process of writing and said that as far as her regular columns were concerned she could hammer on her keyboard with her one eye closed but a book, she said requires focus particularly in the formatting stage when there is too much information and no structure. “Once I have worked out a structure I’m definitely more relaxed but even then there is a constant anxiousness and this continues till the book is complete. When I’m working on a book, I wake up early in the morning so I can write for long uninterrupted hours.  During this time I’m so absorbed that even brewing a cup of coffee is a distraction.  I don’t like to socialize while I’m writing for it consumes my energy. Also, I don’t want to make an effort in formal dressing but meeting up friends is refreshing and you look forward to such breaks.”

Shehan Karunatilaka, author of Chinaman said in an interview that he begins writing at dawn and stacks his table with five different kinds of fluids so he does not have to get up from his desk till lunch hour. After a power nap Shehan is back to the computer screen absorbed in the world of his characters.

Author, columnist and opinion maker Shobhaa De has always said that the only way to write a book is to write obsessively.  De whose new book Sethji has recently released says she writes every waking hour of the day until her book goes for print.
Next time somebody asks me ‘how do you write…where do you write…how many hours a day?’ I will not feel self conscious to answer for I now know that it is more or less the same story with all the authors.