Film Writers’ Association will be in a few days presenting a screening of the award-winning documentary film Final Solution followed by a discussion with director Rakesh Sharma at their office in Andheri. It is a film FWA is extremely proud of and has been screened at various film festivals and won various awards, including the Berlin International Film Festival where it was described as a compelling and thought-provoking documentary. 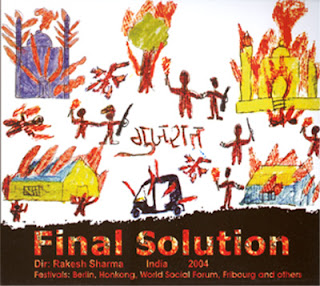 Final Solution is a study of the politics of hate. Set in Gujarat during the period of Feb 2002 to July 2003, the film graphically documents the changing face of right-wing politics in India through a study of the 2002 genocide of Muslims in Gujarat. It specifically examines political tendencies reminiscent of Nazi Germany of the early/mid-1930s. The documentary film Final Solution is anti-hate/ violence as “those who forget history are condemned to relive it”. The ‘Final Solution’, (German: Die Endlösung) which the title of the film refers to, was Nazi Germany's plan during World War II to annihilate the Jewish people, resulting in the most deadly phase of the Holocaust, the destruction of Jewish communities in continental Europe.

Prescribed as a must-watch for all Indian filmmakers and writers, the film has to still release in India. For further information about the event, please visit our website http://www.fwa.co.in/SitePages/Final-Solution-Screening.aspx