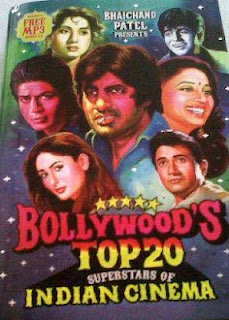 The book rightly begins with KL Saigal and Devika Rani and wrongly ends up with Kajol and Kareena Kapoor. And, it doesn’t have Nutan, Rekha, Sridevi and Dharmendra in the list, says Utpal Kumar
An edited text is mostly a book written in a hurry. An author — eager to get a book published under his name — arranges for a few writers to contribute articles. And the book is ready within months, if not days. Such books lack focus, and the quality of writing goes up and down with each article. Even if you ignore the ordinary write-ups, the truly good ones too fail to break much ice due to lack of space and words; by the time the writer actually warms up, he is told to wrap up the piece!
Bollywood’s Top 20: Superstars of Indian Cinema, edited by Bhaichand Patel, is no different, though you won’t get a better set of writers — from Meghnad Desai and Madhu Jain to Nasreen Munni Kabir, Jerry Pinto and Bhawana Somaaya — to tell the history of Bollywood and its protagonists. The book rightly begins with KL Saigal and Devika Rani and wrongly ends up with Kajol and Kareena Kapoor. The inclusion of the last two, along with Hrithik Roshan, disappoints one the most, particularly when one doesn’t find Nutan, Rekha, Sridevi and Dharmendra in the list.
It’s not that the editor doesn’t know he is stirring up the hornet’s nest by including the three at the cost of other worthies. He justifies: “The reader may well ask why Kareena Kapoor found her way among the twenty and not, say, Nutan or Vyjayanthimala. Let me explain. Kareena’s competition was neither Nutan nor Vyjayanthimala. Her competition was Katrina Kaif, Priyanka Chopra and Imran Khan. She is the most successful of the current crop. Nutan and Vyjayanthimala’s competitors were elsewhere, several decades ago.” But aren’t we selecting the top 20 of Bollywood? Will we leave Rahul Dravid from the list of 20 best cricketers just because there is one Sachin Tendulkar playing with him? The best doesn’t necessarily have to be from every era.
The book begins with Vikram Sampath’s eloquent portrayal of a young, lanky Kundan aka KL Saigal who spent “eight long wanderlust years” before finding music director RC Boral in Calcutta in 1931. Boral took him to Birendra Nath Sircar, founder of New Theatres, who signed “a five-year contract with him on a monthly salary of Rs 200”. Sampath showcases his rise, his simplicity (whenever people praised Saigal for his singing, he would say: “I haven’t killed a tiger. I was just singing”), and how the producers of Bombay, wherein Saigal had to migrate once Calcutta ceased to be the city of films in the early 1940s, “seemed to throttle the great artiste and squeeze the soul out of his throat”.
Cary Rajinder Sawhney carries the momentum forward with Devika Rani, whose life had been more theatrical than a Hindi film story — she married a much older man, ran away with a lover from the sets of a film and after the death of her first husband remarried a Russian painter to leave the glamorous filmi world forever.
Likewise, one finds interesting nuggets from the writings of other contributors, particularly Bhaichand Patel (Ashok Kumar), who has done a better job as writer than editor, Theodore Bhaskaran (Nargis), Pavan K Varma (Meena Kumari), Jerry Pinto (Waheeda Rehman) and Avijit Ghosh (Rajesh Khanna).
Shefalee Vasudev, Madhu Jain and Urmila Lanba, however, are the best. Vasudev demystifies Madhuri Dixit both as an actor as well as a woman, telling us quite convincingly that she has always been a polite but politically-correct person with no strong opinion on any issue. Jain and Lanba, on the other hand, have the benefit of covering the two most charismatic personalities — Dev Anand and Madhubala respectively. Though Jain has hardly anything new to add, especially after Dev Anand’s tell-all autobiography a few years ago, she seems to have dealt well with the actor’s chemistry with his two talented brothers. As for Lanba, she is sincere in depicting Madhubala’s conflicted relationships with her father on the one hand and Dilip Kumar on the other — and how she stood
by the former when she had to choose between the two. Lanba, however, falters in blaming Kishore Kumar for ignoring Madhubala during her illness. Dilip Kumar no doubt is the hero of the story, but Kishore Kumar doesn’t have to be the villain either.
The articles on Shah Rukh Khan, Aamir Khan, Kajol, Hrithik Roshan and Kareena Kapoor are good but predictable. We know so much about them — and we continue to hear so much on a regular basis — that there’s hardly anything new one can know about them. And, there’s hardly any desire to know them as well.
The two writers who disappoint the most are Meghnad Desai (Raj Kapoor) and Sidharth Bhatia (Amitabh Bachchan). If you have read Kishwar Desai’s Darlingji, dealing with the love story of Nargis and Sunil Dutt, you already know Raj Kapoor’s possessiveness and insecurities — how he stopped Nargis from doing movies with Dilip Kumar and Mehboob Khan, and how from being the lead actress in Barsaat and Andaz, she was marginalised with a cameo in Jaagte Raho. As for Bhatia, he tells nothing new about Amitabh.
The book is a good read and would be liked by lay readers. But serious ones will have to wait for some more time.
Posted by Bhawana Somaaya at 13:02