May 16: Sitting by the window looking at the first ray of the orange sun stream into his bedroom, something triggers inside Sanjay and his mentor Mahesh Bhatt is the first to notice it when he arrives a few hours later at Imperial Heights, Sanjay’s residence. Mahesh senses that something has happened overnight that helped Sanjay find strength within him to face his destiny. 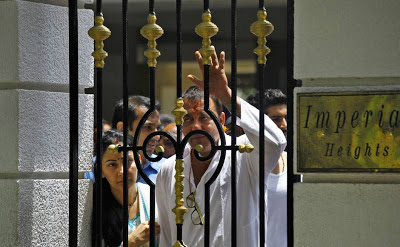 He is scheduled to leave home at 1.30 and minutes before that the entire family with all the children forms a circle holding hands and chants a prayer. His sister applies a vermillion tilak on her brother’s exactly the way their mother had bid farewell to all of them every time anyone departed a long journey. One by one Sanjay embraces every member of the family and staff and after a long, lingering look at his home, he steps out of the house towards the iron gate of the bungalow behind which wait innumerable media cameras.

A motorcade of cars led by the police jeep blaring a siren drives from Pali Hill but there is a further road block from the media at the Tada Court  that prevents him from stepping out of the car. Sanjay pleads with the media to let him go inside because he has a deadline but they are unrelenting. Finally, Sanjay jumps out of his Innova car and walks through the crowd hit on the shoulder and chest by TV camera crews.

Inside the court Dutt is ushered into the accused box, while his advocate Rizwan Merchant seeks permission from judge to allow his client to carry thin mattress and pillow as he suffers from steno stenosis in both his limbs and electric cigarettes without which he is prone to migraine attacks. Merchant requests home food and family visit for his client. Home food is granted for a month while order for family visits is yet to be passed. Judge agrees to all except cigarette, says ‘Quit smoking’.