May 25/ Saturday: It is three days since Sanjay has arrived at Yerwada and he spends most of his time catching on his sleep. Yesterday, his old pal Jyotin Goel’s 'Hum Hain Rahi Car Ke' released in Sanjay appears in a guest appearance as Inspector Karate. Life is indeed ironical that while he grants justice to all on the big screen, he is at the mercy of law in real life. 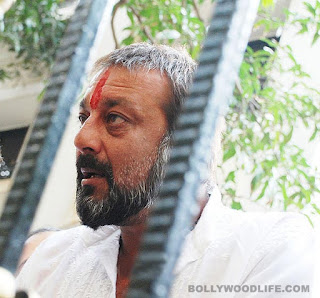 Today is a day when inmates are allowed to meet family and while the regular visiting hours is in the mornings, Yerwada Suprintendent, Yogesh Desai feels it is safer to block a separate time for Sanjay to meet his relatives to avoid distractions so even though Sanjay’s family has arrived in the morning they wait till noon for the others to finish and then talk to Sanjay in private.

Sanjay arrives in the allotted area wearing the prison cap; he appears composed and spends 30 minutes with his family and lawyer. When time is up, he embraces them all taking care not to show emotion and discreetly returns to his cell.