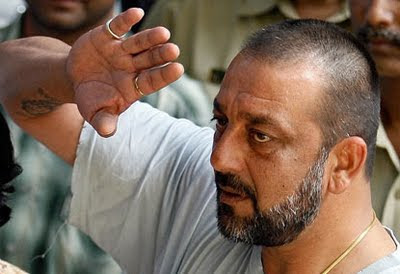 Today, finally, Sanjay is assigned his task in the prison. Everything that happens inside jail is according to procedures.  The counselor spends time with the inmates, understands their stamina and temperament after which an appropriate task is drawn for the candidate. For instance the last time, when Sanjay was in prison, he was assigned the task of making cane chairs. Sanjay had never imagined that he had the aptitude to create chairs but he did and one out of these was even auctioned after he was granted bail. Sanjay remembers the daily wages earned from these tasks, he remembers how he saved every penny of his hard work. This time the counselor has allotted him to make paper files. This is also because the authorities want to preserve his security and don’t want him to go outside his cell.

Sanjay is happy to start his task because this is the only way he can distract himself from thinking about what is happening outside.  His new film 'Policegiri' is due for release in a fortnight and had circumstances been different, this would have been the most productive time of his career. He is excited about Policegiri because it is his only solo film in present times and how it fares will determine his future in films.