May 22/ Wednesday: Sanjay who has just fallen asleep and senses somebody waking him up. It is the jail guard asking him to get ready in five minutes as they are to leave the premise to travel to Yerwada in Pune. 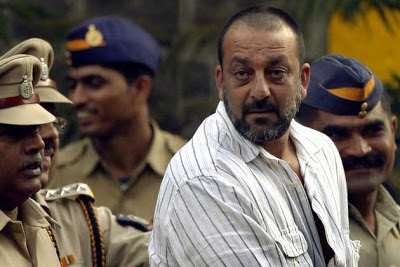 Sanjay asks if Nulwala is going with him but is given no answers. At 4 am when Sanjay steps out of the jail he is happy to discover Nulwala traveling in the same car with him. This is indeed a surprise. Two extra police cars one ahead of the car carrying Nulwala and Sanjay and the other, behind them leave Arthur Road accompanied by 15 armed policemen.

The convoy takes Pune Express route and there is high alert all the way till they arrive inside the high security central jail at 7. Pune city police not informed about Dutt’s visit are taken off guard. Sanjay and Narula are sent for medical examination. Doctors say Sanjay is fine except that he has had no sleep in the last many weeks.

Some more formalities later Sanjay is allotted a convict number- 16656 - and led to his new, separate room which is in barrack III which is 10x8ft room divided with a partition for bath- toilet and sleeping area. There is no electricity in the room but since he is allowed to use a fan following a court order, a connection will now be obtained from outside. Sanjay is permitted home food for which the family has made arrangements but since the Tiffin service was not intimated of Sanjay’s arrival, his first day lunch arrives late and Sanjay uncomplainingly has the same meal for dinner.

Sanjay has had a long day and a strenuous week of keeping awake and worrying.  He is relieved to be in a room with ventilation and light, grateful for the table fan.

He is exhausted, very exhausted and drops on the mattress and for the first time in so many weeks to fall asleep within moments.