Jagran Film Festival begins in New Delhi’s Siri Fort Auditoria on July 1 is an initiative by the Jagran Group towards creating a culture of cinema appreciation. JFF screens films across genres, documentaries and world classics apart from student films and ad films.  An important aspect of the festival is to generate a discussion on the various aspects of Cinema and its impact on society and popular culture. A series of Panel Discussions will be held with deliberations by eminent personalities from the film industry. 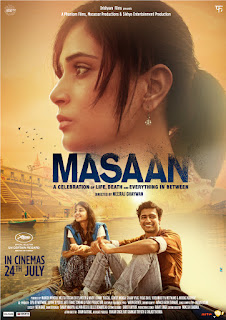 The opening film this year is a clash between tradition and modernity Masaan winner of two prestigious awards the FIPRESCI, International Jury of Film Critics prize and Promising Future prize in the Un Certain Regard section follows the stories of several individuals in Benares, the holy city on the banks of the Ganges.

A collaborative effort of Phantom Films, Drishyam, Macassar Productions, Pathe, Sikhya Entertainment and Arte Cinema, France,  Masaan will be presented on July 1, 2015 evening by Neeraj Ghaywan and the star cast of the film to the festival delegates personally. Manoj Srivastava, the Festival’s Strategic Consultant says, “It’s a matter of pride to open the festival with such a prestigious and worthy film. This is just the beginning; the festival has a lot in store for film delegates this year which would be revealed over the next few days...”

Posted by Bhawana Somaaya at 10:18