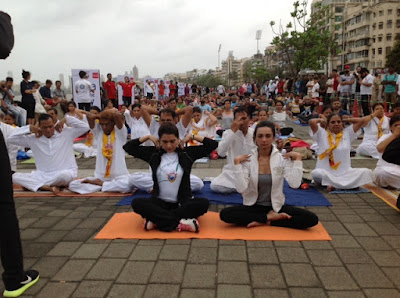 It seemed like the Mumbai rains would be a spoiler but Mumbaikars flocked in large numbers with their yoga mats, some to practice and some to learn from experienced Yoga teachers.

The event was supported by senior officials from Navy, Army and Air force and also Central Railway and Western Railway officials.

Children from St. Lawrence & St. Thomas Schools, as far as Borivli and Dahisar came to collect saplings and what was wonderful was that the children had their own school Music Band to welcome the guests which made the event all the more special.