In less than a month we will witness the power of three formidable performers namely Amitabh Bachchan, 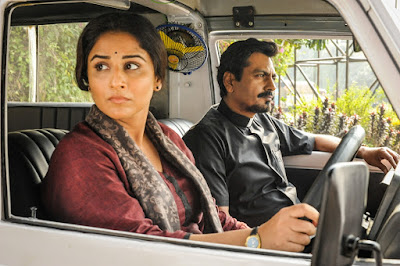 As we all know the film is a thriller shot in Kolkatta and Vidya Balan comes in a special appearance. Vidya has a special relationship with the film unit and if last time in Kahaani she had to learn to walk and breathe like a pregnant woman, this time she has to learn skill she is not good at, for instance driving.

Vidya Balan shares that she learnt driving very early when she was in college but was never a confident driver. For TE3N however I’m required to drive in a very important sequence in the film and I wanted to do it myself without a double, so took over the wheel and after a brief warning to all to look after themselves dashed around driving around the narrow streets of Kolkata. I don’t know about my companion Nawazudin in the adjoining seat but I felt safwe because Sujoy Ghosh was my driving instructor.”