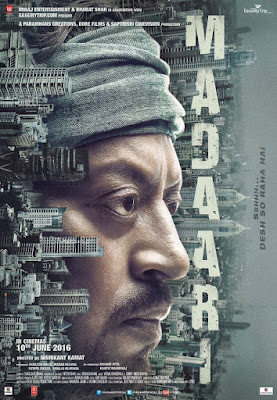 The film opens with a voice over questionning that presuming there’s a fight between an eagle and a mouse, who would win? If the eagle wins, the story becomes predictible. If the mouse wins, the story is unrealistic, so the third end is the story of Madaari.
An ordinary man/Irrfan Khan kidnaps the son of a powerful man, Home Minister/Tushar Dalvi and throws him a challenge.
This is not a regular cop and culprit chase. The issue is not ‘who’ but ‘why’. Shot on varied and fast changing locations within the interiors of India, the characters walk the sands, tan in the sun, sleep on chugging trains, ride in rickety buses and walk hungry for days.
What works about the film is the premise, the message and the intention. Director Nishikant Kamath has always displaced radical choice subjects beginning with his award winning Dombivali Fast, later Mumbai Meri Jaan on bomblasts and recently debate on right and wrong in Drishyam. This time Kamath knocks on your concience and exposes those in power.
The problem with Madaari is we have been throug similar journeys of the common man in A Wednesday and Traffic and the plot is devoid of surprises. The narrative is slow paced and the story unfairly hero centric. One misses the involvement of Rohan’s school, classmates and parents, particularly mothers of other students.
The main problem is the exaggerated climax. Would any minister under any dire circumstances ever visit a common man to resolve a crisis?
Jimmy Shergill as the investigating cop Nachiket is effective but almost invisible. Child star Vishesh Bansal is bright and cheeky but the film belongs solely to Irrfan Khan. As the dishevelled, unkempt kidnapper always on the move, Irrfan is merculrial and sparkling.
There is just one song in the film composed by Vishal Bharadwaj and another from Urdu poet Faiz Ahmed Faiz in the endcrdits and both add to the story telling.
Moral of the story: it is not necesaary for either the eagel or the mouse to conquer each other if both are accountable and ethical.

Posted by Bhawana Somaaya at 11:36