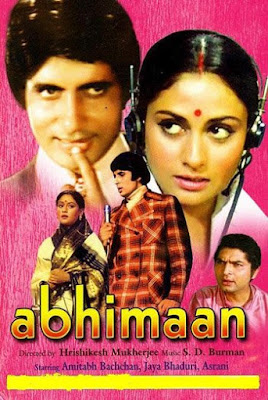 It is 43 years since the release of Hrishikesh Mukherjee’s Abhimaan/July 1973 but the film is still fresh in our memories. We still listen to the music of the filmin our car and become nostalgic. Everytime the film is shown on television I stop to watch one more scene and end up watching the entire film again. It is called the power of the medium. The digital media is full of annecdotes on the film and the cast but we are always hungry for more details. The film was ghost produced by Amitabh Bachchan and Jaya Bhaduri that is why it was called Amiya Productions. Jaya wore her personal saris in the film. The film was originally titled Raag Ragini but Hrishida changed it at the last minute to Abhimaan because he felt it better suited the story. Amitabh and Jaya got married during the film and shot the climax after they returned from their honeymoon.