In a small town of Haryana Sultan, son of a farmer prefers to runs an independent business with a friend. His real passion however is to chase kites and one day while in the process, he bumps into a courageous girl and loses his heart to Aarfa, a city girl and a state level wrestler.

To become worthy of Aarfa /Anushka Sharma Sultan/Salman Khan has to become a champion, which he does and soon they are happily married and Sultan on his way to become a gold medalist.

The first half of the film concentrates on the love story, the second half on the Boxing Ring. The premise is not very different from other films made on the same subject and the narrative follows the rise and fall and rise of the hero. What makes Sultan different is that the heroine is a sportswoman too and understands the complexities of the game. 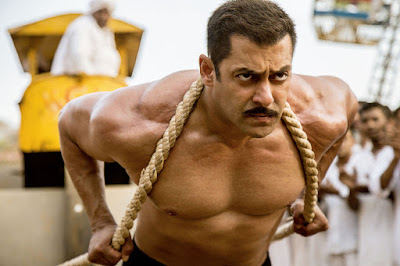 What works about the film is the refreshing milieu, the Haryanvi dialect and the emotional drama between the protagonists. What doesn’t is the length/ 2 hours and 50 minutes and the pace of the film. It is repetitive and predictible too.

Salman Khan has given extensive interviews on the physical exertion entailed during the shooting. He rolls in the mud, chases trains, leaps over walls, cycles, jogs, punches, gets punched, lifts weights, bricks and wrestlers.

The heartbeat of Sultan – literally and metaphorically is the tantalizing Anushka Sharma. Confident and restrained Anushka proves that less is more.

Posted by Bhawana Somaaya at 20:30