WIFT rather Women in Film & Television Association in India is actively working to create an awareness about how women are portrayed in multi media. It is an International association and the moving force behind WIFT, India is a young, dynamic called Petrina. Petrina has in a very short time mobilized support from the strong and mighty women in all fields and working tirelessly to link them to the rest of the tribe through their special work. 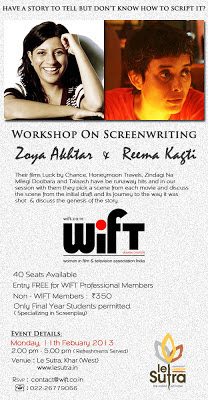 The first time she came into notice was at the IFFI where she opened a seminar on the subject and invited women from the media to participate. Next she planned a Master Class with Vidya Balan and I had the privilege to conduct an In Conversation with the actor taking her through a journey of her roles and films.

Vidya was slightly nervous in the beginning but later started to enjoy herself as the experience of analyzing her work with an evolved audience proved cathartic. This time the Master Class was ob script writing and when Zoya Akhtar and Reema Kagti arrived at Le Sutra for the seminar , both told me that they would like the session to be wrapped up as early as possible for they have very little to say.

A while later as the script session began the duo was so engrossed in the audience interaction and reliving of four fabulous films Luck By Chance and Zindagi Na Milegi Dobbarra by Zoya and Honeymoon Travels and Talaash by Reema Kagti that two hours went by unnoticed.

Post script discussion I conducted an In Conversation with them and asked how the duo divides their writing responsibilities? Akhtar and Kagti emphasized that the partnership was an advantage and as long as they can they would prefer to work together.

As audience we would prefer that too as what they have churned out together is fabulous.

Posted by Bhawana Somaaya at 18:33