36 years ago on this day a film was released called Hum Tere Aashique Hain losely based on the story of My Fair Lady.
Produced and directed by Prem Sagar and written by KKShukla and Ramanand Sagar. 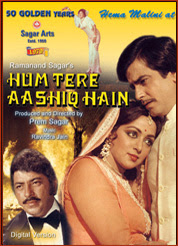 I remember being sent to the mahurat of this film as an intern by my editor and stood in a quiet corner at Mehboob Studio watching Hema Malini dressed in a gown and hat give coy glances to hero Jeetendra.
Those were days of elaborate mahurats after which the shooting began immediately.