Today the role of Jessi in Hare Ram Hare Krishna is synonymous with Zeenat Aman but there was a possibility that she may have not done this film.

The truth is that Jessi was first offered to Mumtaz but Mumtaz refused because she did not want to tarnish her romantic pairing with Dev Anand after the stupendous success of Tere Mere Sapne directed by Vijay Anand. 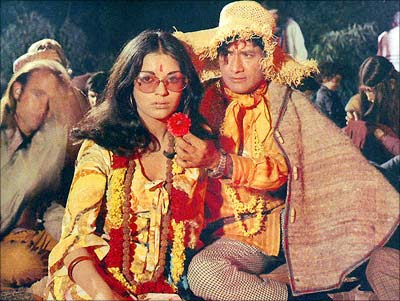 Dev Anand was happy with his experience of working with Mumtaz and wanted to repeat her in Hare Ram Hare Krishna under any condition.
Mumtaz was willing to do the film provided she could play the love interest of Dev Anand and Dev Anand agreed.

It was a good role with few songs but nobody had anticipated that the winner of the film would be the sister, Jessi, njot even Dev Anand.

Call it the frenzy of the seventies but the nation went crazy about Zeenat Aman and Asha Bhosle singing Dum maro dum…
Mumtaaz however never regretted her decision, on the contrary said, may be it was in her destiny to create a star.

Rest as we all know is history.