When I watched Dev Anand shoot his last film with the same joi de vivre like he did many decades ago, I had begun to believe that he was perhaps immortal.
I was wrong. 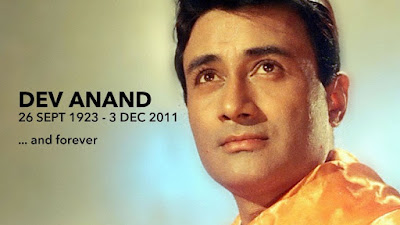 Devsaab had been keeping unwell for some time just never talked about it and one day, when he could take the exertion no more, he quietly boarded a flight to UK for further treatment.
On December 3 around 10pm Devsaab suddenly felt restless at Washington Hotel, London.

Immediately two ambulances pulled up outside the hotel and paramedics rushed to Room Number 207 but it was too late because Devsaab had passed away after a massive heart attack.

Dev Anand's son Suneil was by his side when the end came. One of the ambulances took them away to a nearby hospital where Anand was pronounced dead.

Dev Anand, 88 was in London for a medical check up but also for the UK launch of his 1950s superhit, Hum Dono, in colour. As a tribute to his remarkable career, Britain's Channel Four had organized a Retrospective of Dev Anand films featuring Baazi, Guide, Hum Dono and Jewel Thief.

He was very keen to be present for the color version of Hum Dono screening but that was not to be.
Dev Anand did not come back home but his family organized a prayer meeting attended by all his loved ones.

Posted by Bhawana Somaaya at 10:57