Harshali was in character - DAY 732


Omkaar Kapoor was nominated as Most Entertaining Debut/ Male for Pyaar Ka Panchnaama 2 and little Harshali as Most Entertaining Debut/ Female for Bajrangi Bhaijaan. Everyone expected Suraj Pancholi to win the Debut Male but the votes went to Omkaar Kapoor who started his career as a child star best remembered for playing Sridevi Anil Kapoor’s son in Judai.
Harshali did not make it in the debut race but was honored with a 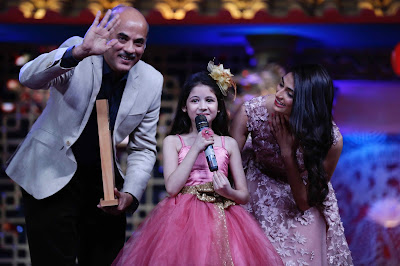 Special Award presented by the beautiful Athiya Shetty and Sooraj Barjatya. When the microphone was handed to Harshali to make her thanks giving, she remained silent in keeping with her character in Bajrangi Bhaijaan till she was prompted by Athiya to say something, she did finally.


Omkaar Kapoor almost jumped out of his seat when his name was announced because he was not expecting it. He thought Suraj Pancholi will win the award, just in the way Nushrat Barucha was certain she didn’t stand a chance in the Most Entertaining Role in a Comedy Film/ Female and when her name was announced went crying to the stage. It was a night of many surprises.