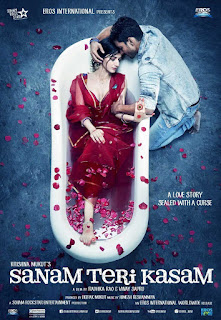 The lead pair  soon to be released of Sanam Teri Kasam, Harshvardan Rane and Mawra Hocane came to 92.7BigFM Studio and we had an engaging interview  where  Mawra, 24, and a renowned actor in Pakistan discussed her journey from neighbour country to show business. Apparently the director was on the look ourt for an actor who could cry and look beautiful and a common friend spoke to Mawra’s mother and Mawra was called for audition.
Hero Harshvardan ha s an interesting story about how he eloped from home at the age of 17 did odd jobs did until he landed a role in television and the rest is history.

While Harshvardhan taught Mawra to eat and relish Indian vegeterian food like dossa and idli, Mawra enlightened him on Urdu.

Posted by Bhawana Somaaya at 09:35