DAY 763 - Ghayal Once Again is bumper too 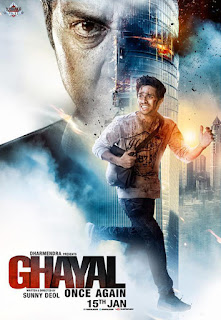 Sunny Deol was nervous when he turned producer with Ghayal in 1990 and twenty five years later, he is nervous about turning director with Ghayal Once Again starring but he can now heave a sigh of relief as the audience has given him a clean chit for his directorial debut.
I was at the theatre to catch first day first show and was unprepared for a housefull. Not only werte the audience clapping but remembered the old doialogues by heart.

Currently there are celebrations at Deol household as the film opens to a whooping 7.20 CR net on Friday and they are still counting.