Strangest things happen in the lives of film stars. They make friend, foes and at times
relationships out of strangers. Recently when Akshay Kumar was shooting in Transylvania for
his forthcoming film Singh is Bliing he encountered an unexpected problem during the shooting
of the climax. 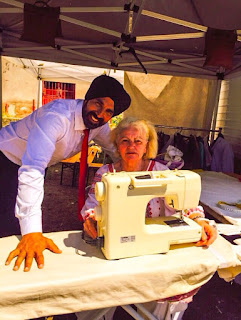 His co-star, a Romanian fighter in an action scene with him accidentally ripped off his suit. Since
the suit was part of the continuity and there was no time to waste, Akshay suggested the unit
look for a local tailor to repair the suit rather than wait for the designer to fix an alternative.
As luck would have it a local Romanian grandmother part of the spectators at the shooting
helped the unit by sewing the suit with her needle work talent.
The Romanians were proud of their grandmother to have helped an Indian superstar.

This is called a stitch in time saves nine!