For a long time we have been hearing about who will get to play the second wife of cricketer Azharrudin in his biopic produced by Balaji Films and to be released in 2016.
Now it is no more a secret that Prachi Desai will play Sangita Bijlani in Azharrudin.
When Azhar was asked who he would like to see in that role he had blushed and said, “Get the original since she is an actress too”. 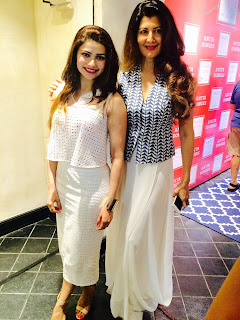 But that was not to be and we spotted the two women together at a leading designer's collection preview for Vogue and they appeared more than friendly.
Now we know why because in show business nobody smiles and poses for camera without a reason.

Posted by Bhawana Somaaya at 07:17