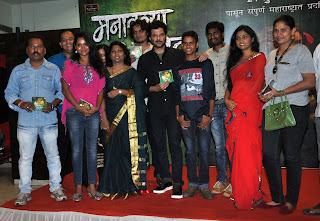 There are some who make a big hue and cry about supporting a cause and some who do it quietly. Anil Kapoor falls into the latter category. The actor has been in the news for the role of a businessman in Dil Dhadakne Do going strong overseas but the actor is rooting for regional cinema.
The first look of Anand Sagar Productions and producer Vijayshree Patil's first production Manatlya Unhat directed by Pandurang Jadhav was unveiled at the hands of Kapoor in the presence of the entire cast and crew of the film. Anil made it a point to praise all the actors and the technicians involved in the team and wished them the best
Manatlya Unhat is about the new generation, their dreams and how they affect the life of their parents. Sensitive and substantial the film will prove pathbreaking in social dramas.
Bhawana Somaaya / @bhawanasomaaya

Posted by Bhawana Somaaya at 10:20